Round Played: with Morrie Smith and Terry Epton –

On June 12th 2017 “Team Rubber Ducky” (Morrie and I) took on the awesome Makai Golf Club at Princeville on Kauai.

(Click on the pictures for a larger view – then use the browser ‘back’ button.)

Terry rounded up Charlie to form “The Boys in Blue” as competition.  Oh yeah, the stage was set for a good time!

We got the scorecard completion out of the way early.  On the third hole The Boys in Blue pulled ahead … the ducks worried them but they stayed ahead.

The 3rd hole – both ducks were long – and Terry stuck his tee shot near the pin for a birdie.

But Team Rubber Ducky was not going to let a little thing like the score get in the way of FUN.  We were playing golf amongst the most spectacular scenery on the planet … and we were enjoying it. 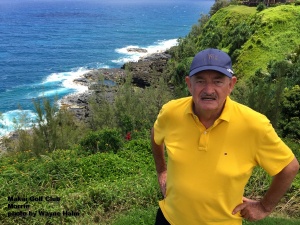 Wayne and Morrie worrying Terry about his lead.

There is an opportunity here … Team Rubber Ducky is accepting new members.  All it takes is a yellow shirt and the ducky shorts.  Some golfing ability might be nice, but it is not essential … we are going to have fun anyway.