Round Played: with Dan Roton, Mike Tafoya, and John Iwema –

Sunshine, ocean breezes, and a challenging course … I just knew it was going to be a great day! –

On February 22nd 2017 I played the Wailua Golf Course with my buddy Dan Roton.  Mike Tafoya (from Castle Rock, Colorado, USA) and John Iwema (from Bolingbrook, Illinois, USA) joined us.  Guys just out to have a good time … and we did.

My “good time” started a bit later than theirs.  As Mike said about my first hole, “You got a little ‘catawampus’ there”. I hadn’t heard that term in a while.

But the guys were having too much fun … it took a couple of holes, but I just had to join in. 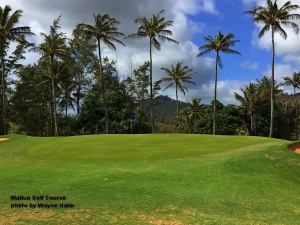 And the “good times” continued.  There is nothing quite like crushing drives in the sunshine to put smiles on golfer’s faces. 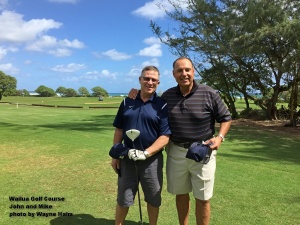 On the back nine Mike’s performance even drew a following of sorts.

At Wailua putting can be a challenge for me … I frequently leave them short.

The challenge occasionally affects Dan also … and he putts well.

But Mike and John took the greens in stride … no problems.

Yeah, we were a bunch of happy golfers.  Well, maybe Mike was a little happier … he played the back nine at par!  And at Wailua, that is no small feat.

This was another fun day on a golf course … lots of laughs.  Great weather, great course, and great company – this was the way golf should be.

4 thoughts on “Sunshine is just Better”