Round Played: with Lisa Vlooswyk –

Bruised but not beaten … I went back at it –

On February 9th 2017 I played the Makai Golf Club with Lisa “Longball” Vlooswyk from Calgary, Alberta, Canada.  This was the second round of our “Lisa and Wayne Challenge”.  Her husband, Anton, and her son, Luke, again joined us – and again we had a fun round.

(Click on the pictures for a larger view – then use the browser ‘back’ button.)

Lisa is a seven-time Canadian Long Drive Champion and has been featured on the cover of Golf Tips Magazine.  She is nick-named “Lisa Longball” for a reason … it can be humbling to play with her.  For more about Lisa read her website

I want to thank Doug Sutter (General Manager) and Eric Belmonte (Golf Professional) for arranging this round. 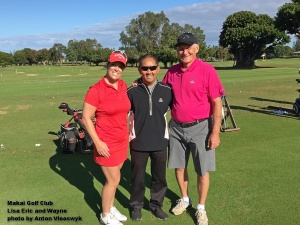 The Makai Course has been one of my favorites since the mid 1990s.  I find the course not only beautiful and challenging, but also fair to first time players.  Oh, there is still plenty of trouble for me to get into, but it’s all visible trouble … no hidden “gotchas”. 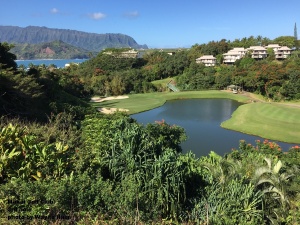 Yep, plenty of trouble for me to get into.

Oddly for me, I wasn’t even tempted to offer advice to Lisa and Anton.  Was I hoarding my local knowledge?  No, I simply didn’t have any … they both hit the ball completely beyond my experience.

Lisa is known for hitting the ball a long way – but Anton is no slouch either. 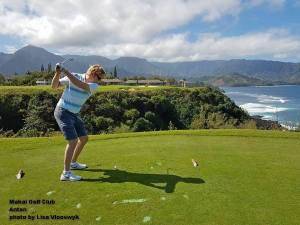 Anton has a big powerful swing.

I didn’t offer any advice but on the second fairway I did point out one item of personal interest. 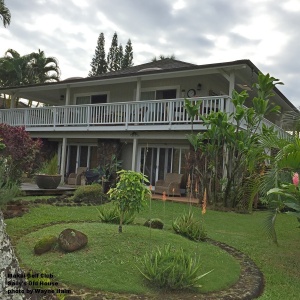 If I learned anything from our first round, it was concentrate on the par3s.  They are the only place I have a chance of hitting a better tee shot than Lisa.  The Makai course has some memorable par3s – here’s how we played them. 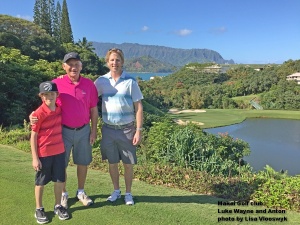 The 3rd hole – Lisa and I were both long … call this one a draw.

The 7th hole – Lisa was on the green a long way from the pin, I was much closer but in a bunker … this one is debatable. 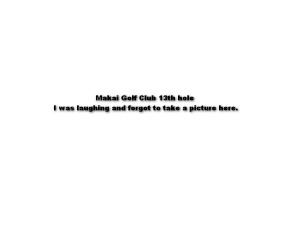 The 13th hole – This hole plays over 200 yards and I never hit the green, however Lisa did … score one for her. 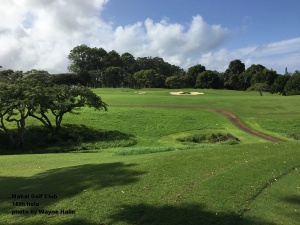 The 16th hole – Lisa stuck this on near the pin, and I missed just to the left of the green … score another one for Lisa.

Yeah, I “took a whippin” on the par3s … and any ideas I had of “bragging rights” faded to a distant dream.

In the pictures you can see that the Makai Course is a stunning location … but it is also a class operation.  On the 10th hole the Ambassador showed up with a tray of chilled fresh pineapple. 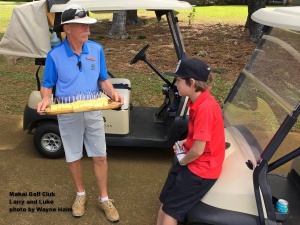 Luke was having difficulties … but he waited for his Mom 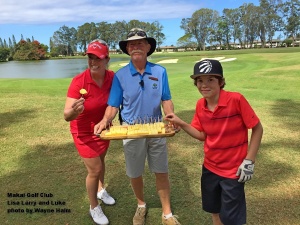 Then they both attacked the pineapple.

Refreshed, Lisa and her EPIC Driver continued their dominating performance.  They lead the way on 13 of the 14 driver holes. 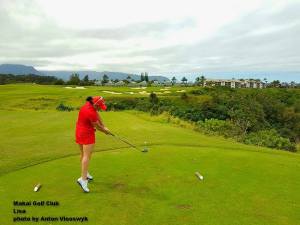 Lisa and her EPIC Driver

However the 12th fairway is nearly as wide as it is long.  It is an open invitation to really crank it.

Anton took full advantage of this … and out-drove Lisa.

In the fairway at their balls Anton asked me, “Wayne is that where they are going to build the new Super Wal-Mart?”  Being confused I asked him ,”Where?”  Anton grinned and said, “In that large space between my ball and Lisa’s.”

Lisa good naturedly chased him around the golf cart for that one … and it was the reason I forgot to take a picture on the next hole.

The 18th hole on the Makai Course is a difficult one for me.  It is long – it has two lakes to cross – and it comes at the end of the round when I’m tired. 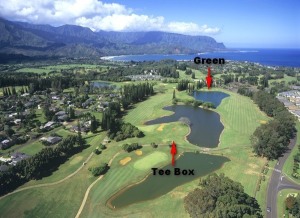 See the problem for us average golfers?

However, “Lisa Longball” is not your average golfer.  She easily reached the green in two and two putted.  Amusingly, she did a double take when I told her, “Great birdie” … she hadn’t realized it was a par5. 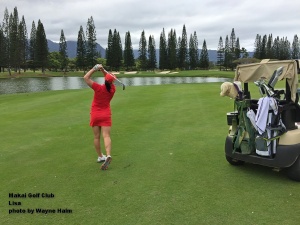 Yeah, I took another beating on the scorecard = but that’ not where the FUN is recorded.  On the course we laughed to the point of distraction and beyond.  I think that is a good thing.  I think … it is the way golf should be.

Back at the clubhouse a Callaway Demo Day was going on.  Callaway Golf is one of Lisa’s sponsors.  Lisa stepped up to show the guys just how far the new EPIC Driver would go … I already knew. 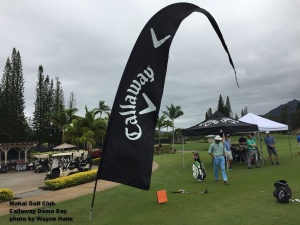 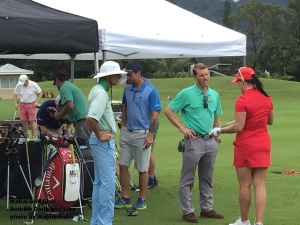 On the range I noticed … well, the obvious.  Do you see a similarity in the swings shown in the videos below?

As always Callaway did an excellent job of the Demo Day … attention to the finest detail. 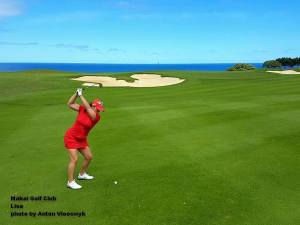 I appreciated the coordinated color scheme. 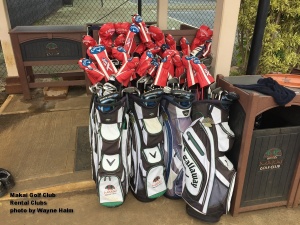 Coordinated across the board. 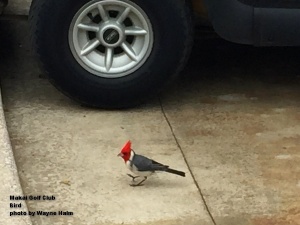 Completely across the board.

5 thoughts on “Head to Head with a Pro Round 2”