Round Played: with Josh and Beth Strukoff –

To paraphrase – Calgary, the Eagle has Landed …

On December 3rd 2016 I continued my golf odyssey with my buddies Josh and Beth Strukoff from Calgary, Alberta, Canada.  We played the Makai Golf Club at Princeville on the Northshore of Kauai.  Sometimes things just work out … the weather was wonderful.

It rained so much the day before that the course was still “cart path only” – but we didn’t care, we were out to have fun on this beautiful course.  There were still a few damp spots on the fairways … but not the greens. 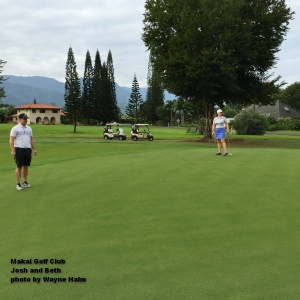 The paspalum greens were firm and perfect.

On the second hole I pointed out my old house.  My dog and I frequently sat in that yard and watched the golfers.

Well, occasionally my dog did more than watch – I kept a box of ProV-1’s on the lanai to replace stolen golf balls.

The par-3 third hole is an absolute joy to play.  It is not all that long but it drops a good bit.  You need to club-down … but how much?

We all used different calculations for how much to club-down … but our results we all within the margin of error.

From the green we all looked back up at the tee boxes … and gave a little “Thanks”.

However, getting the ball on the green is one thing.

Getting the ball into the hole is quite another.

Josh discovered that the course has some interesting vegetation not found in Calgary. 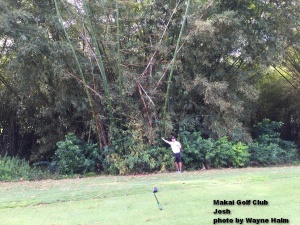 Josh and the Giant Bamboo.

Out by the ocean we paused for pictures … it is required by Rule 7 of “Wayne’s Rules of Resort Golf” which states, “Golfers must stop at all scenic points for pictures – it make the folks back home envious.” 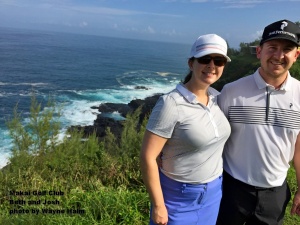 Beth and Josh with Queen Emma’s Bath in the background. 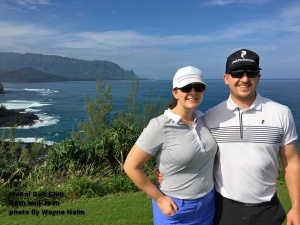 Beth and Josh with Bali Hai in the background.

Heck, even the old guy got into the pictures.

With the pictures out of the way for the moment, we turned to contemplate our next shot.  Those big smiles faded.

Yeah, this shot gets the adrenaline pumping.

Josh put some juice on it … and was safely long. 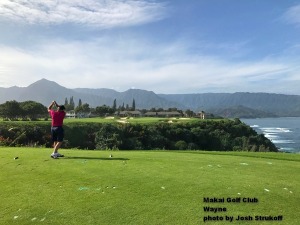 And you bet Wayne was safely long too.

A chip and a putt later … the smiles returned.

The 12th fairway is almost as wide as it is long … it’s an open invitation to “let ‘er rip”.   However, cart path only became a consideration here.  Beth was tempted to just declare her ball lost, take the strokes, and hit another.

But she didn’t … she hiked over to her ball … hit it onto the green … and saved the steps on her next shot.

Have I mentioned that Josh hits the driver a long way?  Well, he does.  Watch his tee shot on the par-4 14th hole below.

After that drive I decided that the putt deserved a video too.

That Eagle crashed and burned.  And we had to evoke Rule 9 of “Wayne’s Rules of Resort Golf” which states, “It is absolutely forbidden to bitch about birdie”.

The Makai Golf Club has a “birdie rule” also, ”It is forbidden to harass the Albatrosses.”

Albatrosses nest on the golf course. Here one is sitting on her eggs. (Photo taken with the camera zoom.)

As the memory of the missed eagle putt began to fade Josh noticed that he had our only birdie on the card.  He got happier … and might have even strutted a little. 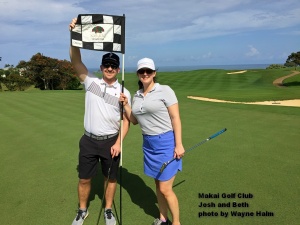 But Beth was a good sport, she tolerated the ribbing.

Then we came to the 18th hole.  It is an interesting par-5 that challenges golfers to absolutely know their capabilities. 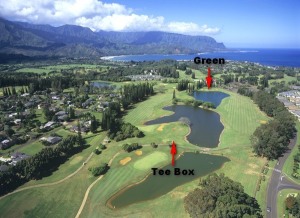 This is the best overview I have of the 18th hole

It takes a long and accurate drive to both clear the first lake and stop near the shore of the second.  Beth and I “egged” Josh into trying it … and he did it! 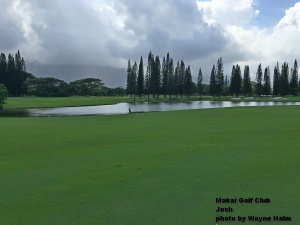 Josh sizing up his second shot. (Beth and I didn’t want to walk all the way across the fairway just to watch Josh hit the ball into the water.)

But Josh didn’t hit the water …  He hit his second shot even better than his first …  It stopped about 3 feet from the pin … and he tapped it in. 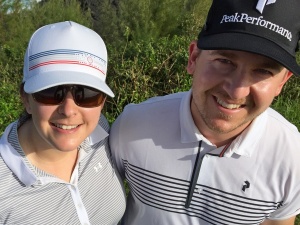 Beth rewarded the Eagle with a hug.

This was a fun round – and it just got better as it went on.  We had a beverage afterward and re-lived it a bit … well, mostly the 18th hole.  This was golf the way it should be.

Josh writes a golf blog called Golf is Mental – he should post about this round soon.  Check it out … Compare his experience to mine.

Josh, Beth, and I have played before – read about our previous rounds below:

12 thoughts on “Josh and Beth Round 2 Makai”