On November 5th 2016 Ike Cockett and the Koloa Landing Resort at Poipu put on a charity golf tournament at the Hokuala Golf Club.  The format was a four man scramble – and it was just plain FUN.. 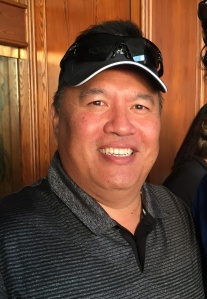 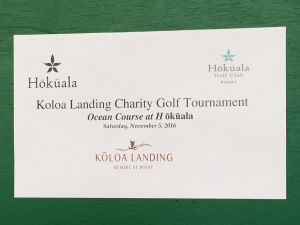 I played in this tournament.  My buddy Ike is the General Manager, and my wife Sally is the Director of Sales and Marketing, at Koloa Landing … but I didn’t play on their team.  Before they remembered to tell me about the tournament, Laine Malson with Enterprise Rental Car asked me to play on his team. 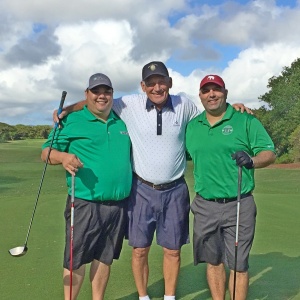 The Enterprise Team – Laine Wayne and Dax … we had a fourth, Ian, but he couldn’t make it.

The tournament had a large turn-out.  It worked the Hokuala staff pretty hard … but they did an excellent job.  We started promptly at 8am.

Laine, Dax, and I began on the 285 yard downhill 16th hole.  I stepped on the tee first and hit a 7-iron 165 yards down the middle.  Dax asked, “Why didn’t you try to hit the green?”  I answered, “Because I didn’t want to lose the first ball I hit.”  Laine and Dax both went for the green … we played my ball, missed the putt, and parred the hole. 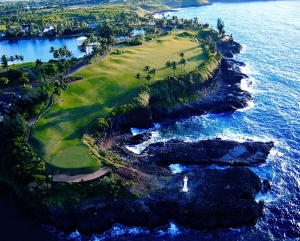 Aerial view of the hole

On the 18th fairway we encountered a family of Nene (Hawaiian Geese).  The adults are handsome birds and the chicks are adorable little fluff balls.  These guys are an endangered species and protected by law.

Perhaps the Mother remembered the accuracy of my shots … anyway she ushered her family well into the woods.

The boys were happy on 18 – we started out birdie string.

Having just re-opened from renovation, the front nine was young.  But it played well and looked great.  Kudos to the grounds-keeping staff.  We continued our birdie string.

The par 3 eighth hole – there was attempting prize on this hole … to Sally’s pain I didn’t win it.

We had some challenging shots, but we continued our birdie string right through the 15th hole.  Yeah, that put smiles on our faces.

Laine, Wayne, and Dax – Birdies and ocean views … what more could a guy want?

Well, hugs from a pretty girl are nice too.

Laine and Dax – big smiles after the last putt dropped.

We finished with a gross 16 under.  That was good enough to get me more hugs from pretty girls … and a fine seat to watch the winners get their prizes.

This was my prize – not bad for an old guy.

But there were a lot of other prizes – just handing them out kept Ike busy.

This charity golf tournament went off exceptionally well.  Someone worked really hard on it … and I appreciated that. 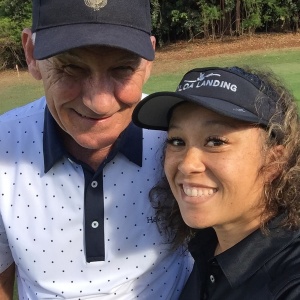 Laine, Dax, and I didn’t have the lowest score – but we likely had the most FUN.  This was the way golf should be.