Round Played: with Mark Schacter and Susan Heritage –

— What do you do when you have a great time? You do it again that’s what! —

Mark Schacter, Susan Haritage, and I had so much fun on the Puakea Golf Course that we decided to do it again.  On February 28th 2016 we played the Makai Golf Course.  Sally came along to keep Mark honest and to coach me.

The Makai Golf Course is one on my favorites.  It can play tough, it has some great terrain features, and it is well bunkered.  It is also fair to first time players, there are no hidden “gotchas”, the challenges are all visible.  It’s not easy, but it’s a fun course!

While the Makai course can be fun, there are decisions to be made – some not easy.

The designer, Robert Trent Jones Jr., doesn’t hide problems on the Makai course – he challenges golfers to ignore the incredible beauty and hit the shot anyway.

Susan trying to ignore the ocean, mountains, and ravine.

I didn’t score well on this round – but there is a plus side to that.  According to my calculations I shouldn’t be in another bunker until late June – I’ve used up my quota. 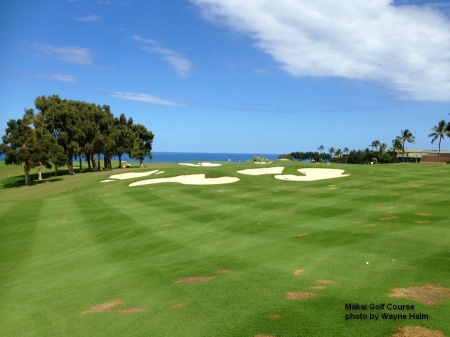 The Makai course has lots of bunkers.

And I was in far too many of those bunkers.

The bunkers are pretty, but most golf courses have bunkers.  However, the Makai course is the only one I know that has Albatrosses nesting on the grounds. 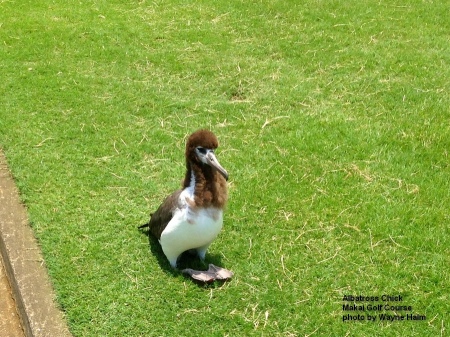 However, the little ones have a long awkward chickhood.

Just for those who have played the course – yes, I lost a ball on 18.  My second shot trickled into the second lake – the Makai Golf Course can play tough.

But bunkers, lakes, lost balls – none of that mattered for long.  The memory of this great day on this great golf course is all that remains.  It was fun.  It was the way golf should be.

I have set a 2016 goal of playing golf with 100 people that I haven’t met.  I’d already played with Mark and Susan, so the number remains at 16.  Want to be in that number?

To see another round played with Mark and Susan click -here-.

Mark and Susan are from Toronto, Canada.  I’ve posted about rounds played with other folks from Canada – see the links below.

2 thoughts on “The Makai Golf Course on Kauai”