I haven’t golfed much lately because I’ve been playing a young man’s game – and losing badly.

Sally asked me to pressure wash the house. 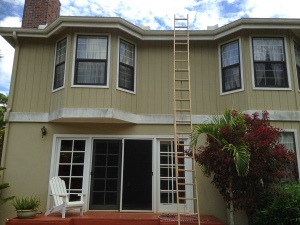 Yeah, it needed it.

(Click on any picture to get a larger view – then click on the browser ‘back’ button to return.)

To begin I washed the concrete patio, just so I could get used to the machine.  That was easy and built up my confidence. 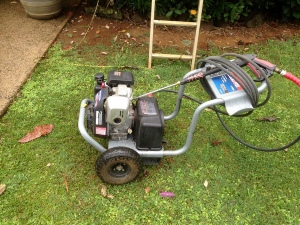 The machine – or “The Little Monster” as I came to call it.

But there is a world of difference between washing the concrete you are standing on and washing the side of a two story house.  The biggest difference is the ladder. 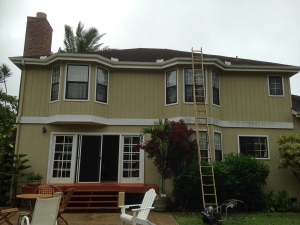 Moving the ladder around and climbing it is hard work.  But standing on it, holding on with one hand and directing the spray wand with the other is absolutely exhausting.  It is a young man’s game.  After a couple of hours each day I would no longer trust myself on “The Beast” and stop.

After one of my two hour stints I sat and watched a British golf tournament on television.  This didn’t last long.  The tournament was on an ugly course in ugly weather, my interest faded fast.

The television did get me to thinking about golf though.  I wondered what effect the exercise was going to have on my game.  So I scheduled nine holes the next day to find out.

My play was everything I feared it would be.  I felt stronger but any rhythm I ever had was gone.  I did keep the ball on the golf course but only hit one green – and that that was a fluke from 205 yards out. 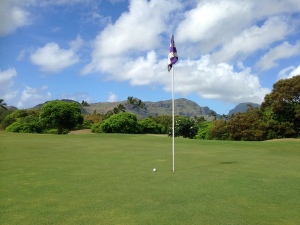 A fluke – but a NICE fluke.

With that lone exception my iron play was way off, but the short game suffered even worse.  I had no “feel” and quickly lost confidence.  It was not pretty – not pretty at all.

I am sure that in a couple of rounds I will adjust my rhythm to my new strength (or more likely my strength will fade back into my old rhythm).  However, it does make me question the wisdom of “getting in shape for a tournament”.

Tell me what you think … and …