Round Played: with Roger Hoffman –

It is just the Hawaiian Way –

On July 19th 2015 I played the Kauai Lagoons Golf Course with my buddy Roger Hoffman from Ko Olina, Hawaii.  Years ago I also lived at Ko Olina, then Roger and I played a lot of golf all over Oahu.  Nothing has changed, Roger still beats me like a drum.

(Click on any picture to get a larger view – then click on the browser ‘back’ button to return.)

Roger flew over from Honolulu for a business meeting (it’s a 20 minute flight).  After his meeting he had a choice to make – fly back to Honolulu – or play golf with me.  He choose golf, it’s just the Hawaiian Way.

We set out to have fun.  Fun is always our main objective in golf.  Our putters contributed, they weren’t cold, but weren’t exactly hot either … still every once in a while they came through.

Occasionally the putters did show flashes of brilliance and here Roger flashed the ‘birdie smile’.

Roger is one of those golfers who prefers to play from the short grass.  He did it all day long. 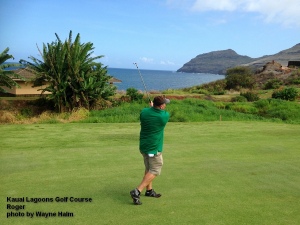 Roger is a strong guy, he can hit the ball a long way – usually onto the green.

Out by the ocean I made Roger pose for pictures.  By nature he is camera shy, but I told him it would be fun and he warmed to the idea. 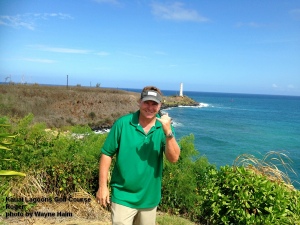 Okay, at first maybe he was a little stiff.

But he did start to ’get into it’. 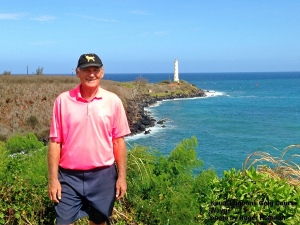 And he insisted that I share in the fun of having your picture taken.

On Kauai weather is a local thing.  The clear trade winds blow in from the ocean, but Mount Waialeale causes them to rise and cloud up.  A few miles can make a huge difference in the weather.  The two pictures below were taken on the same green within a few seconds of each other – the only difference is the direction.

Clear skies out over the ocean.

Cloudy skies up on the mountain.

This was a great afternoon on the course.  We rehashed old memories and made some new ones.  It was fun, a lot more fun than sitting in either of our offices.  It was the way golf should be.

Roger and Wayne in front of the clubhouse.