Round Played: with Paul and Darlene McTaggert –

On June 13th 2015 I played the Kauai Lagoons Golf Course with Paul and Darlene McTaggart from Seattle, Washington.  Sally and her FitBit walked along with us.  This promised to be a fun day – and lived up to it.  (Click on the pictures for a larger view – then use the browser ‘back’ button.)

Some days it takes a few holes for people to get to know one another – this was not one of those days.  We were best buddies by the time we stepped off the first tee. 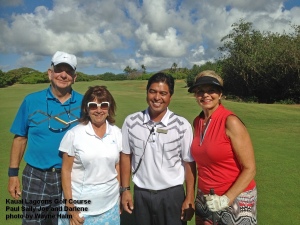 Even a cart replacement was reason to smile and laugh.

We quickly became a type of “mutual admiration society”, we cheered each other on and celebrated everything. 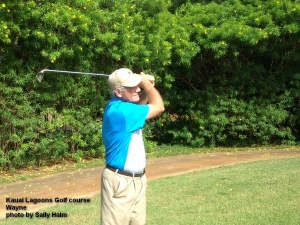 We even cheered Wayne’s iron shots. 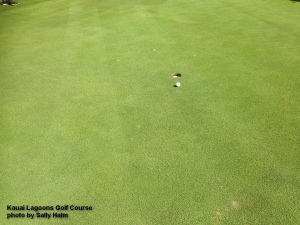 Okay, maybe there was reason to celebrate this one. 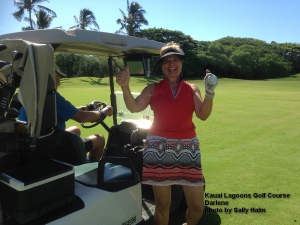 So Darlene celebrated – two thumbs up.

I began to call Darlene “One putt Darlene”.  Distance didn’t seem to matter to her, when she needed it she did it. 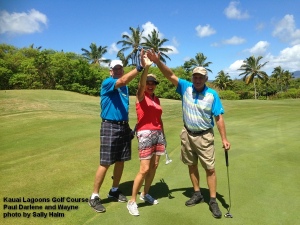 And yes, we certainly celebrated one putts.

If there was a disappointment on this day it was our Menehune encounter. (Menehunes are the little people of Hawaii, sort of like Leprechauns only cuter.  They hide in the bushes along the course and have been known to steal golf balls.) 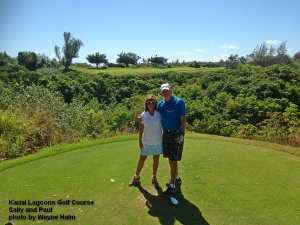 I watched Paul’s ball sail over this canyon, bounce a few times, and roll to a stop in the middle of the fairway. But by the time we drove through the canyon it was gone – the Menehunes got it. 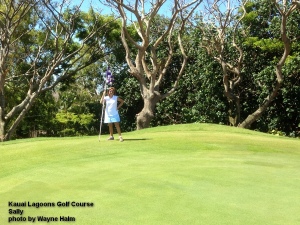 But the little guys were not going to spoil our day. Sally picked up a stick and stood Menehune guard for us – they didn’t come back.

Out by the ocean we waved a single and a twosome through then used the time for pictures.  It was time well spent, just look at the smiles below. 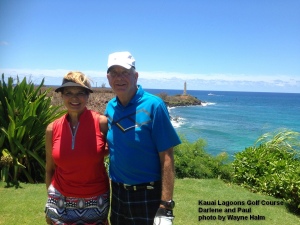 Darlene and Paul on the 14th Tee. 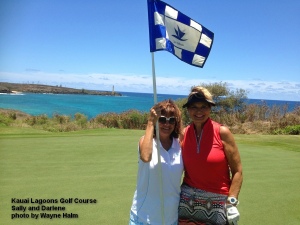 Sally and Darlene on the 15th green. 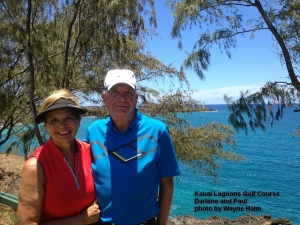 Darlene and Paul on the 16th Tee.

The signature 16th hole at Kauai Lagoons is Sally’s favorite.  It just brings out the ‘coach’ in her.  She simply can’t help it. 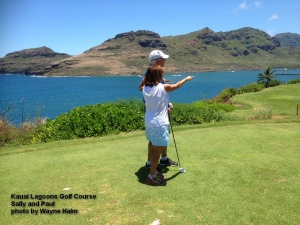 Sally ‘coaching’ Paul on where to hit the ball. 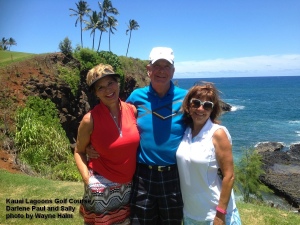 And Sally is good at coaching – another par!

Yes, this was another great day on the course.  Thanks to Darlene’s one putts (and Wayne’s jokes), we did have more laughs than putts.

We were all still laughing when we walked off the course for a “Loco Moco” lunch.  It was golf the way it should be.

Other people from the Seattle area that I have played golf with and posted about   Brian Beaky  Julius Debro and Guy Generaux . 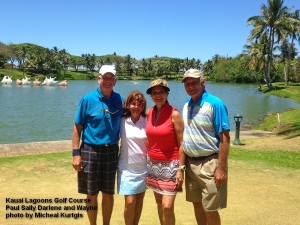