Round Played: with Jorge Gurria and Richard Granowitz –

On April 19th 2015 I played the Kauai Lagoons Golf Course with Jorge Gurri from Mexico City, Mexico and Richard Granowitz from Highland, California.  Jorge’s wife Lola rode with him – we were set for a fun round.

A three club wind literally blew away any ideas for low scores and actually made more room for fun.  We have a saying out here, “The Kauai wind will hurt you – but it never helps you.”  It wasn’t the smart shot, but I started hitting high wedges at the upwind greens just to watch the ridiculous air times (after a couple I began to get better at it). 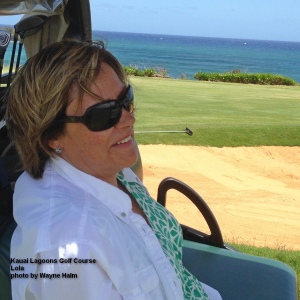 We all laughed at the air time on the wedge shots.

On the ocean nine, where the wind was even stronger, I let my driver rest in favor of the 4-iron off the tees.  The lower shots tended to stay in the short grass more.

We worried about the wind off the tee – however, it is also a concern on the greens. Does it move the ball? Perhaps it does, but I think it moving the golfers and causing them to lose concentration is a bigger issue.

Pictures? Well, they were golfing with me – so of course we took pictures.  Lola was a ‘sport’ in spite of the wind in her hair.

Richard and Jorge on 14th Tee.

Richard on the 16th green – yet another ‘par smile’.

Then we came to the Lagoons.  Perhaps we should have just skipped the 17th hole.  The wind simply gave us fits off this tee. 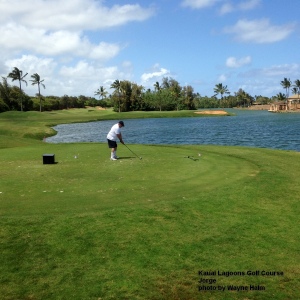 Jorge on the 17th tee – yes, we all splashed balls from here.

If you ever play golf with him, don’t let Richard fool you – he can hit the ball a long way.  On 18 he absolutely crushed a low drive into the wind.  270 yards later it stopped a measly 130 yards from the green. The lad has power. 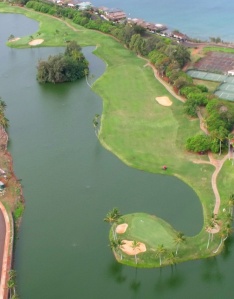 The 18th hole at Kauai Lagoons.

Now I’m not going to brag about our scores, but we did well playing in the wind.  And we had a lot of fun doing it.  It was the way golf should be.