Round Played: with Wayne Juneau –

On March 15th 2015 I played the Lakewood Golf Club in New Orleans with my old buddy Wayne Juneau.  This worked out much better than expected and was a lot of fun.  (Click on the pictures for a larger view – then use the browser ‘back’ button.)

The Lakewood course is special.  It hosted the New Orleans Open, under various names, for many years.  The tournament has since moved on to newer courses, but Lakewood is still a class act.

Rebirth of a Legend

.
Wayne Juneau and I have played a lot of golf together over the years.  Now almost every tee box reminds us of some story that needs retelling.  It was probably best for everyone that the starter put us out as a two-some. 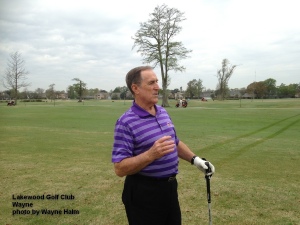 .
This day was overcast and it had been raining all week.  I half expected we would just have another long lunch.  But no!  The excellent drainage had moved the water off the fairways and into the numerous lakes.  The course was ‘cart path only’ but very playable.

Marginal weather but a playable course.

The greens had been dusted with sand for some reason.  I didn’t like this, but my putter did.  I constantly thought my putts would be short only to have them roll right up next to the hole.  I didn’t make the longer ones, but I didn’t three putt either.

Lakewood is aptly named, there are lakes and trees everywhere – it is challenging.  But over the years the course has become friendlier, some of the trees have reached the end of their span.

Ordinarily golf courses just cut down dead trees.  But this is New Orleans.  In New Orleans ‘ordinary’ takes a back seat to FUN.  Below is what they do to dead trees there. 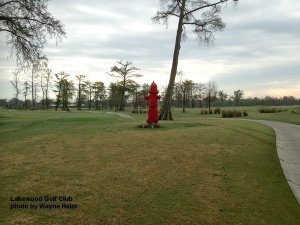 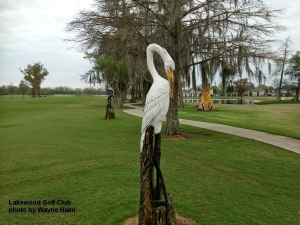 Golf with an old buddy on a classic course!  Oh yeah, we had a lot of fun – and re-lived other rounds.  This was the way golf should be.