Round Played: with Carl and Ellen Forsberg –

On February 1st 2015 I played the Kauai Lagoons course with Carl Forsberg from Minneapolis, Minnesota.  His wife, Ellen, rode along and provided some class to our little group.  (Click on the pictures for a larger view – then use the browser ‘back’ button.) 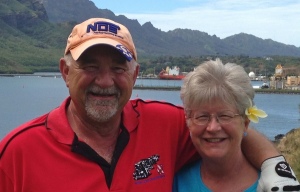 A couple of things surprised me on this day.  I suspected we would have the course to ourselves considering the football game – but no!  A large group of golfers showed up.  They were Japanese and likely less interested in American football than even I.  Importantly, their tee times started after ours.

There isn’t any other way to put this – “I took a whuppin on the score card this day.”  It occurred to me that the NFL gods might be punishing us for playing on their big day.

I took a whuppin on the card but not on the course – we had a great day.  I struck the ball pretty well, but my distance control with the wedge was off.  Add to this some really bad decisions and the results were sometimes comical. 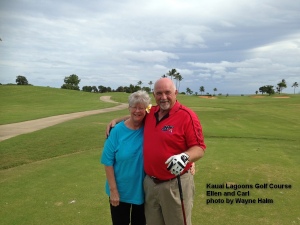 In fact my comical failures may have enhanced our enjoyment of the round.

Golf shots are one thing, pictures are another – I did make some sound picture decisions.  On the back nine I got some good pictures – and Carl got some good scores.

Well, maybe it was Ellen who dressed up the pictures.

Yeah, it was definitely Ellen

A problem avoided.  On the 16th hole, unless you have more backspin in your wedge than I do, hitting the green is a poor option.  The ball tends to bounce off the green and into the ocean.  I avoided this problem by simply flying the green and sending the ball directly into the ocean.  Carl was kind enough to take the sting out of this by three putting – then he posed for some pictures with Ellen. 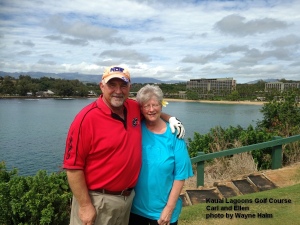 Some class may have been wearing off onto Carl too

Since my wedge went farther than expected on 16, I hit it off the tee on the par three 17th.  It was a solid hit.  Carl and I cheered as the ball rose up headed directly at the pin – we cheered until it fell short into the lagoon.  Another bad decision.

But an erratic wedge was not going to ruin my day on the course.  Carl and I laughed off 16 and 17, then played 18 in fine fashion.  We thanked The Golden Bear for another great day of golf – then went to the clubhouse laughing.  Wedge, decisions, and all – it was the way golf should be.

Carl Ellen and The Golden Bear

When I got home there was another surprise waiting for me.  Due to the time difference the football game was not over.  At the end I saw that I was not the only one making bad decisions on that day. 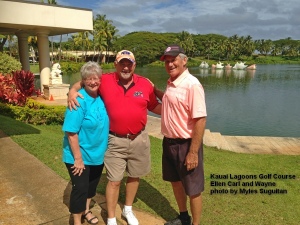