Round Played: with Bob and Anne Flaig –

My driver worked well this day –

On November 9th 2014 I played the Kauai Lagoons course with Bob and Anne Flaig from Walnut Creek, California. 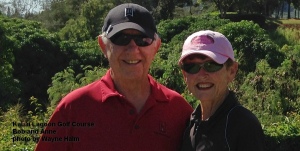 This was a good day – my driver worked well.  Through the rough and down the fairways, my driver carried me the whole way.

My driver, Sally, drove the cart well — My big stick? Well it landed the ball in the rough pretty often, finally it was retired in favor of my fairway finding four iron.

Great weather, great golfing buddies, a great golf course, and a great driver – Oh yeah, I was going to have fun – everyone else did too. 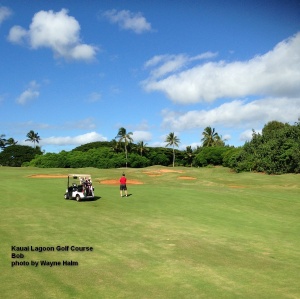 We openly laughed at he bunkers – laughed, but went around them whenever possible.

However, there was no way around the canyon at the 5th hole.  It was just smile and hit the ball. 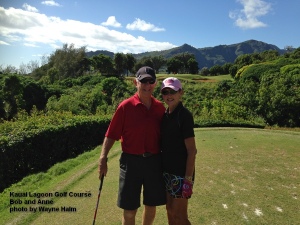 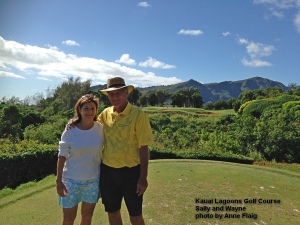 As it turned out we were better at smiling than hitting.  But things just got better – Steve and Sue Nicholson joined up with us. 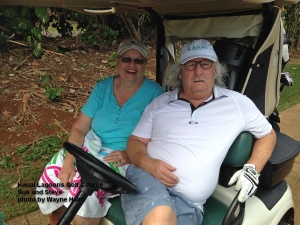 On the 8th hole we learned about each others game.  That is a polite way of saying – we were all over the place.

We were spread out – but we all met up at the pin. 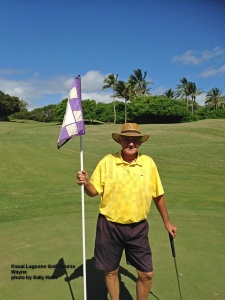 At the pin, one of us was even smiling.

Of course down by the ocean everyone was smiling.  Yes, I took advantage of this for pictures. 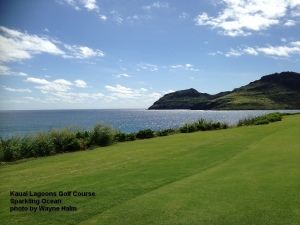 The ocean even seemed happy and sparkled.

And the putts dropped – yeah, everyone was happy.

In fact everyone was happy enough to consent to some formal commemorative pictures. 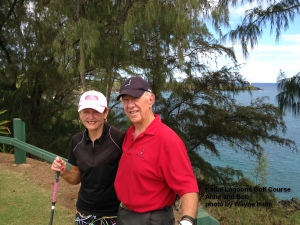 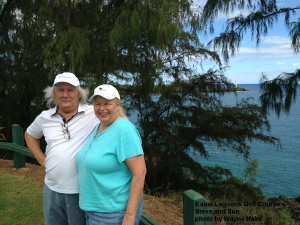 The 16th hole worked out well for Bob and Anne – they kept the ball in-play.  And on the green they were ‘on-stage’. 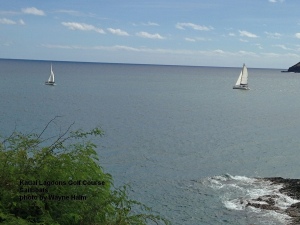 A couple of sailboats came by to watch them putt out.

Now here are a couple of ‘par smiles’.

The Golden Bear 18th hole didn’t wipe the smiles from out faces – this four-some carded not one but TWO pars on 18.

Two pars in this group – but I’ll let you guess who got them.

As I hope this post has shown, this was just plain fun golf – golf the way it should be.