Round Played: with Barry Gabler and Bill Williams –
By Wayne Halm –

Do you take your bartender to play golf?  Think about it – maybe you should.

On September 20th 2014 I played the Kauai Lagoons course with Barry Gabler (my bartender) from Lihue, Hawaii and with Bill Williams of New Haven, Indiana.  This was a good grouping – we all had our challenges, but turned them around and had a fun round.

Bill’s driver started the round with a disappointing “outside-in” swing path.  He worked on it and soon got the big stick under control. 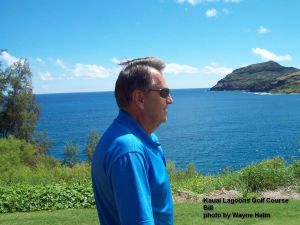 Barry began the round like a tour player.  He had a slump in the middle but roared back from it.

Slump over, Barry was smiling again – And looking very “professional”.

And me?  Well, I muddled along, no birdies, lots of bogies, but more pars than doubles – then we arrived at hole 14 …

The 14th hole can be intimidating – Why? – Well, see how I played it below. 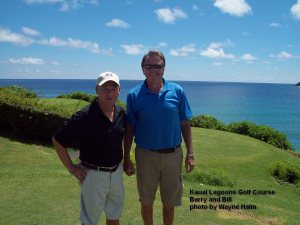 Barry and Bill on the 14th Tee – After my shot but before theirs – They were still smiling.

The 14th hole ruined my score – but I was not about to let it ruin my round.  We still had holes to play and pictures to take. 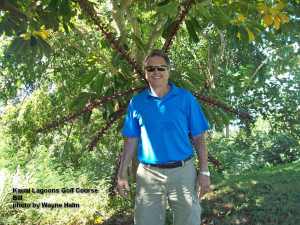 And this is probably my favorite shot on the course – I make everyone take it.

The lagoon in front of the 18th green swallowed a couple of our balls.  So we celebrated our drives and putts instead.  We gave the Golden Bear its due and walked off the course happy golfers – the way it should be. 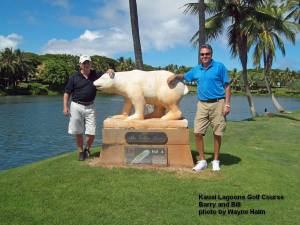 Barry Bill and the Bear – I suspect they will meet again.