Round Played: with Lance and Debbie Bentley –
By Wayne Halm –

“I would compare this with Pebble Beach” – Lance Bentley  —   (When you have a quote like that, you just have to lead with it.)

On September 18th 2014 I played the Kauai Lagoons course with Lance Bentley of Cambridge, New York – his wife, Debbie, also rode along with us.  These two are fun folks.  If you ever get a chance to play golf with them – take it. 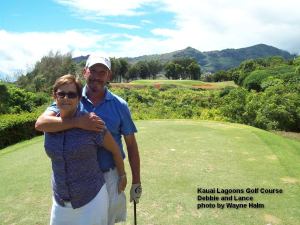 Debbie and Lance on the 5th Tee Box. Lance had already ‘cleared’ the canyon – so he was in a good mood.

This was a great day.  We didn’t exactly “eat up” the front nine, but we made enough good shots to cheer about.  However, the bushes and trees did block enough of the Trade Winds to make it warm. 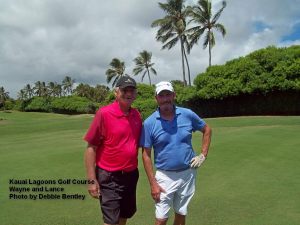 Wayne and Lance on the front nine.

I don’t know how long “Octopus plants” live, but I think ours is beginning to age – it seems to be losing some of its color (compare to pictures in earlier rounds). 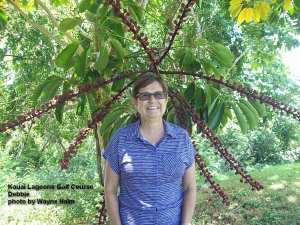 Debbie and the Octopus plant. The ‘suckers’ on the tentacles seem to be losing their blood red color – or maybe it’s just me.

On the back nine the beautiful scenery overwhelmed Lance – he kept talking about Iowa for some reason.

Lance and Debbie on the 13th Tee.

The magnificent scenery put them in a playful mood. I took advantage of the lightheartedness to get some good pictures.

Debbie thought this was too pretty to be serious. 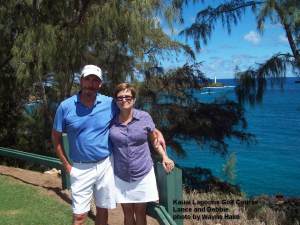 I did get her to pose for one picture.

However, on the 16th green the lighthearted teasing approached the line.

Lance commented to Debbie, “Hey Caddie, I’m on the green. You are supposed to pull the pin.”

Debbie hustled over – pulled the pin – and backed away — but Lance missed the putt. 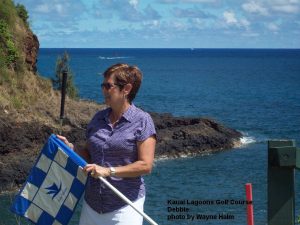 Debbie commented to Lance, “Hey golfer, I pulled the pin. You were supposed to sink the putt.”

But we were golfing on Kauai – and a little thing like a missed putt is soon forgotten.

I put another ball in the water on 18, but we finished the round laughing and smiling – the way golf should be.