Round Played: with Kevin Shanahan –
By Wayne Halm –

On July 17th, 2014 I played the Kauai Lagoons course with Kevin Shanahan of Boston, Massachusetts.  He was visiting the islands on his Honeymoon and his new wife graciously sent him golfing – sounds like a good start to me.

We faced overcast skies, mid 80s, and a 1.5 to 2 club trade wind – not the best for picture taking – but pretty good for golfing.

I started the round aggravated – I had cut my left thumb the day before and it hurt.  The first practice swing convinced me that I had to do something.  I resorted to laying my thumb on top of my right hand (instead of under it).  This felt odd and the ball didn’t go as far, but it stayed on the golf course for the most part.  I was okay with it.  Now, I know this sounds like an excuse – and I admit, it is.  But if you were playing with Kevin, most of you would be looking for an excuse too.  From the tee this lad hits the ball a full country mile – and – it lands in the fairway.

But I was not going to allow little things such as being “beat like a drum” interfere with a fun round of golf.  We swapped stories and laughed for four hours.  Now I think I will make a trip to New England, Kevin made golf there sound like fun.

On the golf course I put my cell phone in my bag.  Kevin kept his in his pocket, he had a plan for it.  On the 16th green he called his wife, who was on Kalapaki beach, and waved to her.  She could see him across the bay and waved back.  It had not occurred to me, but I think it is kind of nice – golfing and sunbathing within sight of each other.

The par three 17th hole and Jack Nicklaus messed with us a bit.  It plays over a lagoon and directly into the trade winds.  I decided that there was a two club wind – and hit my ball over the green into a bunker.  Kevin saw this and backed off to one extra club – he landed short in the water.  He then added another club and joined me in the bunker.  Jack knew that distance control is difficult into a stiff wind – Kevin and I now agree.

Jack may have gotten a chuckle on 17, but we got whoops, laughs and high-fives on 18 – Kevin birdied it!!  With me golf may still be a gentleman’s game – but it is not going to be quiet one.

Kevin and the shoreline. 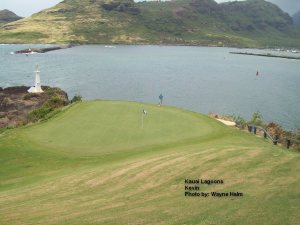 Kevin on 16th green – he was calling his wife on the beach across the bay.