Round Played: with Axel Leer –
by Wayne Halm –

On May 30th 2014 I played the Kauai Lagoons Course with Axel Leer of Ridgecrest, California.  Axel and I had such a good time yesterday that we decided to do it again.  Ron consented to take their families snorkeling – Axel owes Ron big time.

We had visions of “putting meat on the table’’ – of “bringing home the birdies”.  Well, that didn’t happen.  The trade winds were stronger – yeah, let’s blame it on the wind.  We got our share of pars, but the birdie putts just would not fall.

A trade shower provided us a putting lesson.  The shower itself was not much of a problem; they blow over in about 3 minutes.  But on the next (wet) green we both putted short – twice.  I understand the lesson, now if I can just remember it.

Even without birdies this was a great round.  The PoP was good yet we still had plenty of time to talk, laugh, and get to know each other better – resort golf, it’s a good thing.

The 18th is a longish par 4 to an island style green; the real challenge is that it plays directly into the trade winds.  I hit a sold tee shot and decided to go for the green in two.  I estimated the wind to be two clubs, gripped my 6 iron firmly, and prepared to hit the shot hard.   Then I had an epiphany (epiphany is writer speak for a sudden understanding).  Suddenly I understood that I had already compensated for the wind with the longer club and there was no need to crush the ball.  I settled into my normal rhythm and landed the ball in the center of the green.  Oh yeah, two putts later I was strutting around with a par – it felt good – I want to do it again! 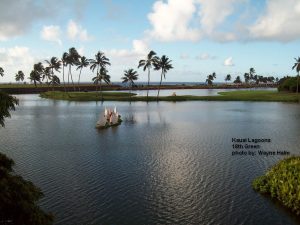